A rescued street dog struggled to enter his new foster house because he’d never been indoors before.

Puppies fostered Boomer was one of four stray dogs living outside a bank, and cruel people frequently used him as ‘target practice.’

The young dog is seen circling and sitting outside the door as he is repeatedly invited into the home in Houston, Texas, for the first time in a heartbreaking video.

Boomer finally makes it across the threshold after much encouragement and several attempts.

Samantha Zimmer, 35, a rescue center worker, took in the two-year-old terrier-mix and initially housed him in her garage to help him adjust to home life.

Boomer, who had a broken femur and a pellet lodged in his ribs, had never been indoors before and struggled to enter their home at first.

The dog appears to be perplexed by the door and house in the video, tentatively pawing at the threshold.

Ms Zimmer and her family can be heard attempting to entice the pup inside, assuring him that he is a house dog and that he is welcome to come inside.

He eventually makes his way inside before changing his mind and returning outside.

After weeks of waiting, the dog is gaining confidence and will be transferred to a new foster center in Wisconsin in three months to be ready for adoption.

Ms Zimmer recounted the incident, saying, ‘I was leaving to go to work.’ Boomer was outside in the front enjoying the morning because my boyfriend was home. 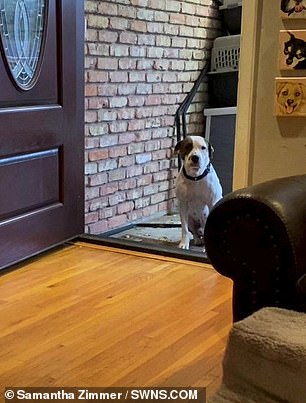 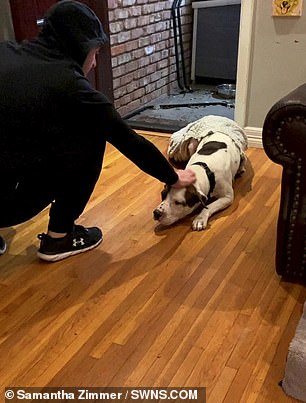 ‘I was interested in seeing if he would come inside and wanted to film it.’ Unfortunately, he was unsure, and it broke my heart to see him hesitate.’

Boomer was discovered by the foster coordinator at Lola’s Lucky Day after she was sent a video of a pack of four street dogs outside a bank – an area she claims is notorious for strays.

‘We picked up two one day and had to return the next day to catch Boomer,’ she explained.

‘He was too shy to approach us. Neighbors in the area enjoy using dogs as targets, or shooting at them for getting into the trash.’

Samantha took him in as a foster child on February 14 and kept him in their garage for the first two weeks.

She would carry him in with her boyfriend but film him because she wanted to see if the two-year-old terrier-mix was comfortable doing it on his own.

Boomer enjoys nothing more than a long walk in the park and a belly rub, but he is wary of larger dogs due to previous street attacks.

‘Boomer is one of thousands of stray dogs,’ Samantha explained. He would have had a difficult time finding a foster home due to his size and breed.

He was too scared to come to us, but with love and patience he has won the hearts of millions of people.

‘What’s incredible to me is that Boomer spent his life invisible to all the humans he encountered.

‘A few people fed him, but for the most part people aren’t surprised to see a stray dog. They throw some food down and go about their days.

‘And now with the help of TikTok this once ignored dog has captured the hearts of so many people.’