Hound Dog Called Elvis! Pet Left With Curled Lip After Half His Mouth Was Torn Off In A Dog Fight Is Rescued By British Animal Charity

Hound Dog Called Elvis! Pet Left With Curled Lip After Half His Mouth Was Torn Off In A Dog Fight Is Rescued By British Animal Charity A German Shepherd has been rescued by an animal charity after being found with a curled lip when half of its mouth was torn off in a dog fight.

Two-year-old Elvis was found close to death and needing to have a leg amputated after being used as live bait in a fight between three rottweilers in Romania.

He was found tied to a tree with his front right leg torn to shreds and the skin around his mouth missing.

Local vets managed to save his life after amputating his leg but Elvis was left with teeth permanently exposed making it look like his was curling his lip.

He moved into a shelter but rescuers knew his looks would prevent him from being re-homed in his home country.

But now an American Elvis fan has paid for him to be transported to the UK to the Safe Rescue for Dogs in Great Yarmouth, who are helping to rehabilitate him before finding him a permanent home.

Kelly Hare, who runs the dog shelter, said: ‘Elvis is a beautiful dog with a wonderful soft, gentle and loving nature. He may have physical scars but he has healed mentally. His tail never stops wagging. 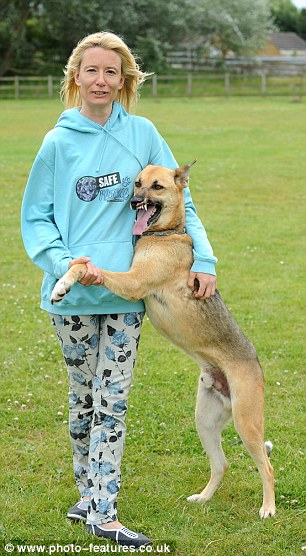 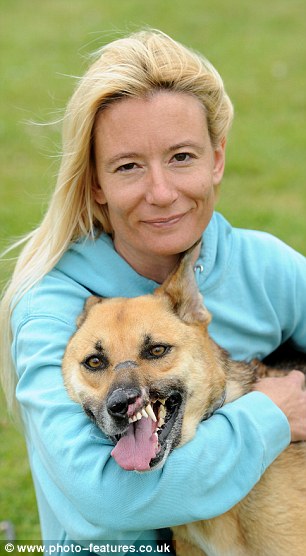 To think that anyone could have used him as live bait is heartbreaking.

‘But tragically this barbaric practice is on the rise and dog theft for animals to use as bait is one of the fatest growing crimes.

‘Dogs are being stolen from people’s gardens and outside shops and are then used to rile up dogs bred for fighting before they compete.

The dogs are torn apart, so they don’t care what dogs they take, anyone’s dog is at risk.’

Elvis arrived in the UK last month and has been living with Ms Hare and her four children while she finds a suitable home.

Her charity has rescued hundreds of dogs from the UK and abroad and is currently fund-raising for a purpose built rehabilitation centre for dogs.