She melted the hearts of the Internet and now, she’s melting comfortably on her own, comfy bed and is getting the cuddles she deserves. The puppy who went viral after she was found scavenging for food as a stray has quite a fairy “tail” story that involves her finding her forever home.

Meeko the terrier mix – who was known as “Dobby” before her adoption — was found roaming through the streets of an industrial part of Iberville Parish, Louisiana when a good Samaritan notified animal authorities about her. When she was found, the then-5-month-old pooch had fur loss, scabs and was emaciated. 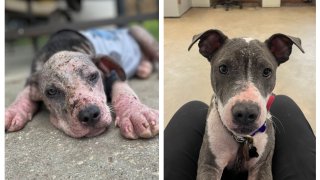 Thankfully, however, she received immediate care at the Iberville Parish Shelter & Animal Control, was briefly placed in foster care and then flown to New Jersey, where she later arrived at St. Hubert’s Animal Welfare Center in Madison.

“Since coming here, her health has improved. She’s gained weight and has been getting treatment for her skin condition,” Diane Ashton, a spokesperson for St. Hubert’s, told NBC 7. “Now, she’s really just a healthy and happy puppy, living her best life.”

Despite having a rough start to her young life, Meeko had the sweetest eyes and a kind, open disposition that yearned for the help she so rightfully deserved, according to Ashton.

“You could tell she was sweet, loving and accepting,” Ashton said. “Since she came to our shelter, she was a staff favorite. She has this amazing personality that makes everyone fall in love with her. She’s won over a lot of people.”

During NBCUniversal’s Clear the Shelters campaign, Meeko’s story was shared nationwide, garnering attention from animal lovers throughout the U.S. and beyond. Ashton said St. Hubert received various calls from prospective pet parents around the world who wanted to adopt Meeko. Ultimately, however, she found her fur-ever family that includes her new human, and three siblings – a 14-year-old dog and two cats.

When she’s not enjoying an energetic game of tag with her feline siblings, Meeko enjoys indulging in the finest of chicken liver-flavored snacks.

Although Meeko’s story has a successful adoption in it, there are still thousands of animals nationwide waiting to be adopted. Ashton encourages anyone interested in getting a new pet to seek out their local animal shelters.