A stray dog that stole a slice of pizza from two office workers eating lunch outside led the concerned Californians to her litter of newborn puppies.

The duo became concerned after the hungry pup swiped the slice of pepperoni pizza, leading them to call the Peninsula Humane Society and SPCA in East Palo Alto on April 17.

When rescue staff arrived, the terrier mix stray led workers to her nest of one-week-old puppies

‘This poor little dog was struggling to survive on her own, eating whatever scraps of food she could find and trying to take care of her babies,’ PHS Communications Manager Buffy Martin Tarbox said.

The stray and her puppies were rescued and placed at a foster home.

The puppies have also been weaned and have been named after the British Royal Family with the mom as Queen Elizabeth and the pups named William, Harry, Duchess Kate, Lady Di, Charlotte and Meghan. 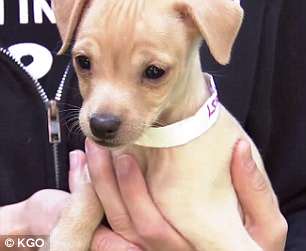 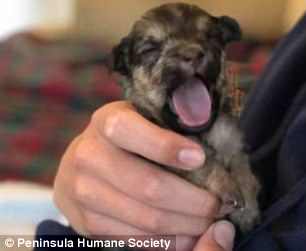