These are the pets that beat the odds and often undergo incredible transformations thanks to their adopters.

Ziva is one such case.

According to Barbara Zuluaga, a board member of A Chance To Bloom, a dog rescue organization based in Houston, Ziva was discovered by the Houston Police Department with a padlock around her neck. The pit bull puppy was eight months old and covered in sores. She had lost most of her fur, had an eye and skin infection, overgrown nails, paws that had been split open, and a burn on her neck from where the padlock had rubbed it raw. She was also severely malnourished, weighing only eight pounds, which is roughly half of what a pitbull her age should weigh. 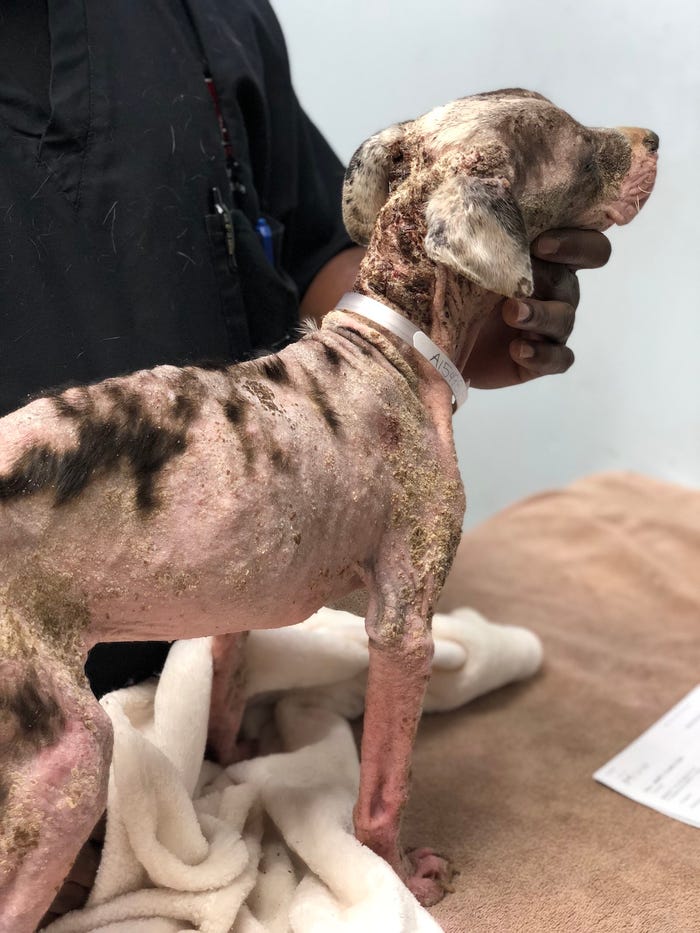 Ziva was found in Acres Homes, which Zuluaga described to INSIDER as a low-income neighborhood whose residents take great pride in not only having dogs, but also in molding them into guard dogs. Often, owners will wean a puppy from their mother and chain them up when they’re just six weeks old. Zuluaga said she’s certain this is what happened to Ziva, who was so neglected that she developed demodectic mange, a type of skin mite that causes infections and the formation of a thick yellow crust around the eyes. This was why she had close to no fur when she was found. 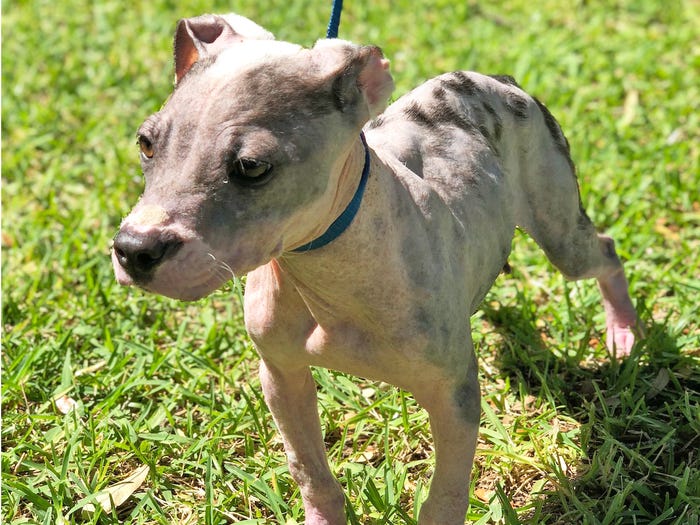 After hearing about Ziva through local Houston shelter BARC, Zuluaga brought the pit bull into A Chance To Bloom, setting her up with the organization’s veterinarian. Because she was in critical condition, Ziva was hospitalized for three weeks, during which she was bathed and given IV fluids and antibiotics. She was also put on a special diet, since malnourished dogs can get sick and die if they eat too much too quickly, Zuluaga explained.

Although everyone at the vet’s office fell in love with Ziva, one vet tech in particular — Stephanie Williams— couldn’t resist taking the pitbull home with her. Williams fostered Ziva for a couple months, and told the Dodo that during this time Ziva grew new fur, put on a few pounds, and learned what it was like to be loved by her owner. When the dog was first discovered, she was timid and avoided all eye contact, something that Zuluaga said is expected of an animal that’s gone through a traumatic experience like Ziva did. But she started to really open up during her foster care. 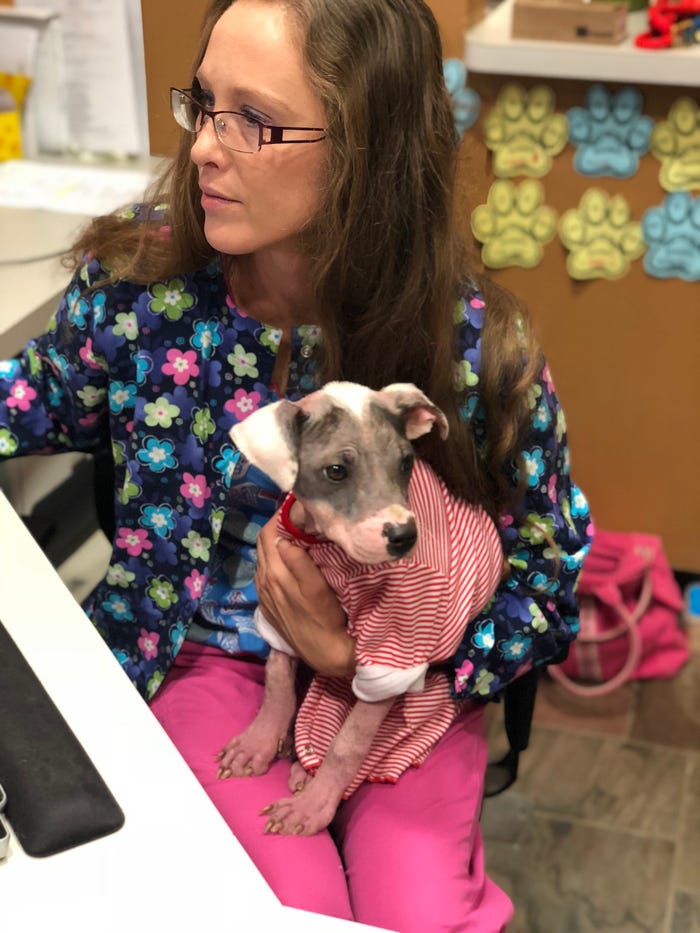 William’s landlord wouldn’t allow her to have a pitbull, so Williams wasn’t able to keep Ziva permanently. Fortunately, Cassie Rogers, an optometrist and dog owner based in Fort Worth, Texas, had already shown interest in Ziva. She had been following the dog’s progress and donating to help the organization. After interviewing Rogers and conducting a home check via Skype, A Chance To Bloom finalized the adoption, and Rogers traveled to Houston to pick Ziva up. 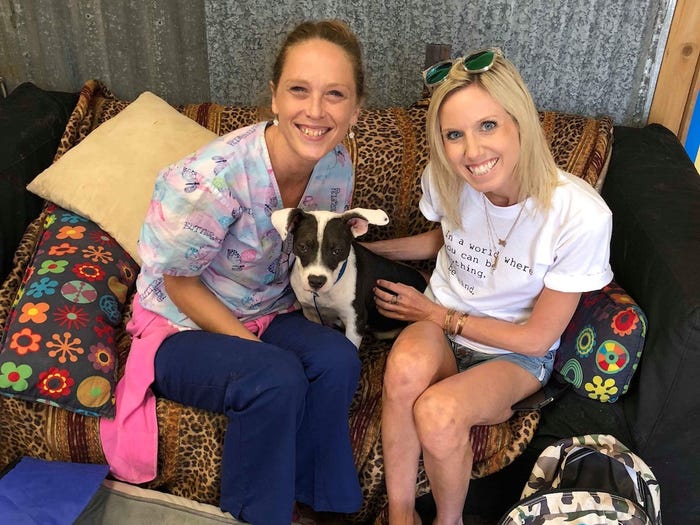 Zuluaga described Rogers as a “wonderful dog mom” and said that Ziva took to Rogers immediately. “We call them ‘Velcro dogs,’ because they just stick to your side. She [Ziva] is just stuck to her mom’s side. She adores her,” Zuluaga told INSIDER. Rogers has stayed in contact with both A Chance To Bloom and Ziva’s foster mom. She’s told them that Ziva — who Rogers renamed Roxy — is doing well and adjusting to her new life. 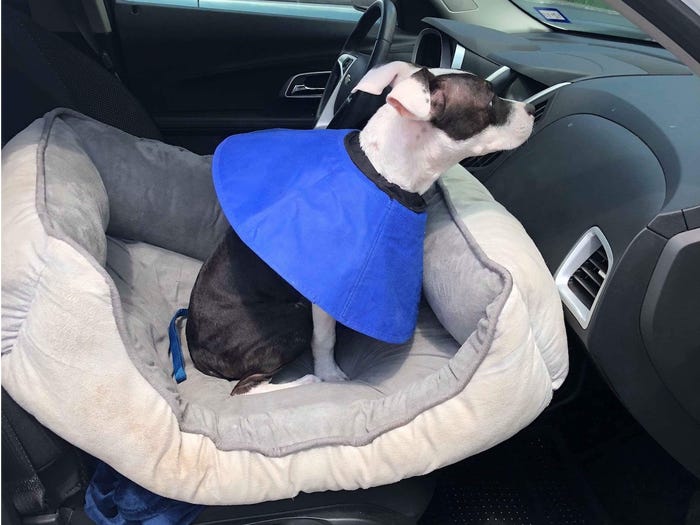 “She has a couple fur siblings. She gets to do all the cool, fun stuff,” Zuluaga said. “That’s the life that we would want for one of our dogs. She’ll get to go to the beach, and she’ll get to travel with her owner.”