An adorable dog who was starved to the brink of death and dumped in the street days before Christmas is now fighting fit after a charity fed her 12 meals every day.

The three-year-old lurcher, called Tiggy, was discovered by a member of the public wandering the streets in Cowpen in Blyth, Northumberland, a month ago.

She was incredibly undernourished and had lost practically all her fur.

But she was taken in by Jan Ross, 56, the manager of Berwick Animal Rescue Kennels (BARK) in the Scottish Borders, where she was fed 12 meals a day and lavished with love.

Since then the pooch has almost doubled in size and now has the energy to go on walks and play outdoors.

Jan said: ‘It is remarkable. She is a remarkable girl. Tiggy has obviously got a lot of fight in her.

‘A lovely family, who have rescued dogs before, have offered her a home and I am so excited for her.

‘She will hopefully be moving in with them at the end of the month. It really is a happy ending. She has come so far.

‘Animal welfare officers sent us photos of Tiggy after she was found abandoned and I was just horrified. I thought she was dead.

‘When she came to us there was not a dry eye, everyone was in tears.

‘But her strength was incredible. Even the fact she was still alive was amazing.

‘I took her home with me to nurse and the rest just followed.’

Tiggy was put on a diet of regular meals to bring her up to a healthier weight and given parasitic treatment.

Jan said everyone at BARK has been astonished by her recovery.

She added: ‘She was on 12 meals over 24 hours then down to about eight.

‘She is now on three meals a day although she tries to push it to four!

‘She is now at 41lbs after weighing just 24lbs when she arrived. She has turned into a normal dog. She has got such a bright, fantastic personality.

‘She is having fun, she is playing, wanting treats.

‘If you met her now you would never believe she had been through such an ordeal.’ 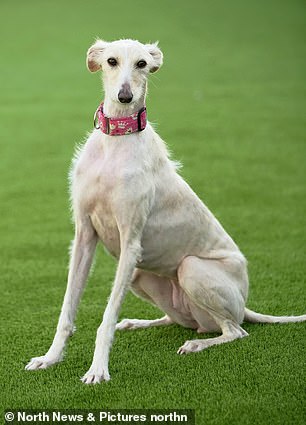 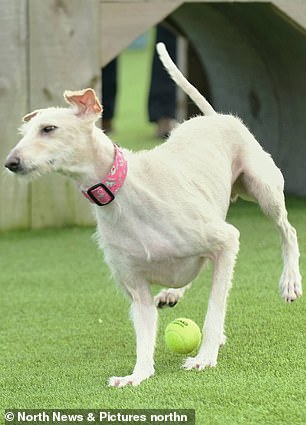 The organisation, which has re-homed over 400 cats and dogs over the last year, gained charity status in 2000.

It was overwhelmed by financial donations, jumpers, coats and hundreds of offers of a new home after Northumberland County Council appealed for information about Tiggy’s owners.

Jan said: ‘The financial donations are great of course but it’s all the shares on social media and good wishes that are important too.

‘We hope that it turns into homes for other dogs and animals, that would be lovely.’

Northumberland County Council said it was a ‘shocking and inexcusable case of neglect’ and issued an appeal to find Tiggy’s original owners in order to bring those responsible to account.

Jan added: ‘I know the animal welfare team are keen for us to find out who her owners are.

‘My message to owners who cannot cope with their animals is to just come forward as soon as they need help.

‘We don’t judge, we understand that people fall on desperate times.

‘However, it is important to note that Tiggy was not the result of desperate times, she was a victim of cruelty.

‘She has made a miraculous recovery and all it took was some food, care and love.’