Monster of the deep? Or just a really funky dead whale?

A monstrously huge creature that washed ashore on a remote Indonesian beach, oozing a mysterious red fluid, is probably a baleen whale in an advanced state of decomposition, experts said.

The nearly 50-foot-long marine creature was lying on Hulung Beach on Seram Island, Indonesia, and was first discovered by 37-year-old local resident Asrul Tuanakota, who initially mistook the creature for a boat, the Jakarta Globe reported.

“There is lots of stuff in the ocean that we don’t know about — but there’s nothing that big” that remains unknown, Werth said.

Two dead giveaways revealed that the creature was a whale, Werth said: the grooves, or “throat pleats,” and the upper jaw where the two racks of baleen plates, used for filtering out food in the whale’s mouth, would have been. [Whale Photos: Giants of the Deep]

While scientists can say for sure that the whale belongs to the genus Balaenoptera, it’s not clear exactly which species it is: It could be either a blue whale or a Bryde’s whale, Werth said. However, Bryde’s whales are not usually that big. The creature could also be a fin whale, said Moe Flannery, the collections manager in ornithology and mammalogy at the California Academy of Sciences. (The creature is definitely not a humpback, she added.) 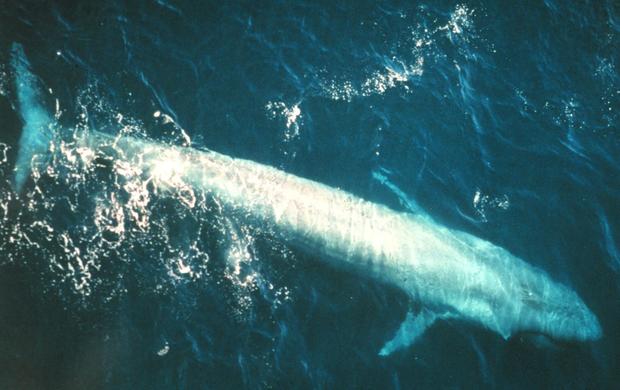 Nasty gases
The beached whale is clearly in an advanced state of decomposition and likely has been dead for anywhere from two weeks to several months, Werth and Flannery said. The decomposition, and the gases produced by the associated bacteria, have inflated segments of the carcass like a balloon, Werth said.

“It must stink to high heaven,” Werth told Live Science.

Baleen whales typically have many bacteria in their guts that produce gas, Werth said. These keep reproducing once the whale dies, creating a foul stench and inflating the bodies, he said.

“That’s yet another reason you don’t want to be close to these things, not because it’s a scary, spooky creature, but [because] it would just be releasing some pretty foul, noxious gases,” Werth said.

Though smelling the decomposing whale is not dangerous per se, people shouldn’t be bathing in or drinking the water nearby, he added.

Normally, when a massive whale dies, it sinks to the bottom of the ocean, where the corpse serves as a feast for a year or two for an entire ecosystem of worms, hagfish, sharks and other marine creatures, Werth said.

However, if a ship swiped the animal, causing internal injuries that did not allow gases to escape, or if the whale had a bacterial infection that produced huge amounts of gases, the animal could inflate like a balloon — enough to float to shore, Werth said. On the other hand, this ill-fated whale may simply have died in warm waters, which tend to fuel more bacterial growth. That, too, could rapidly produce enough gas after death to make the animal float rather than sink, Werth said.

“If it dies in really cold, polar waters, there’s a greater chance it will sink,” Werth said.

This phenomenon is not unique to whales: Two human bodies that presumably were submerged during colder weather popped up in a Central Park pond in New York during warmer weather, Werth said.

Tides or currents may explain why the floating whale carcass made it ashore, Werth added.

Mysterious cause of death
While it’s tough to determine a cause of death in an animal in such an advanced state of decomposition, some clues can still be gleaned from the carcass, Flannery said. For instance, if a ship struck the whale, signs of trauma such as fractured ribs would still be apparent. Identifying a bacterial infection would be difficult this far after decomposition. However, if the animal died of domoic acid toxicity, sometimes caused by algal blooms, a urine sample could reveal that, Flannery added.

At the least, researchers always try to take a tissue sample, which contains DNA that would reveal the species of whale and the gender, she said.

As for the reddish tinge in the water surrounding the whale, that is probably a combination of blood and grease, Flannery said.