San Francisco State University graduate student Eleanor Morgan was walking her dogs on Ocean Beach near Taraval on Saturday afternoon when she discovered a creature in the sand that may as well have been the spawn of the monster in “It Came from Beneath the Sea.”

It had a long, pointed snout and appeared to be just over three feet long. Its torso was smooth, flat, gray and mottled with sand.

“I was really fascinated when I saw it, as I had never seen anything like it before,” said Morgan, 22.

Morgan noticed the animal when one of her dogs tugged on its leash in an attempt to get closer. “I don’t think it had been on the beach for very long because it didn’t smell at all and the tide looked like it was coming in,” she added.

Morgan shared the photo of the creature on Reddit, where it received hundreds of upvotes. Users guessed it could have been anything from a giant squid to “the alien from Independence Day.”

However, the sighting of this single animal — identified by the Monterey Bay Aquarium Research Institute as a male shovelnose guitarfish — is “likely an unremarkable occurrence,” Paul Clarkson, director of husbandry operations at the aquarium, told SFGATE in an email.

“Animals die all the time, of course; sometimes those carcasses wash ashore. If this was part of a larger group of animals being washed up all at once, that might suggest a different story,” he said.

Named for its instrument-shaped body, the foraging predator is related to skates and rays, though it lacks a venomous barb and is harmless to people. The species lives on shallow, sandy seafloors, where it dines on crabs, clams, worms and small fish — a typical bottom feeder diet.

Vikki McCloskey, a curator at the California Academy of Science’s Steinhart Aquarium, said the animal can be found along the coast of the Northern California region down to Baja.

“Shovelnose guitarfish are relatively common and abundant along our coastline,” added Clarkson. “San Francisco is at the northern end of their range, but still well within ‘normal’ for this species.” 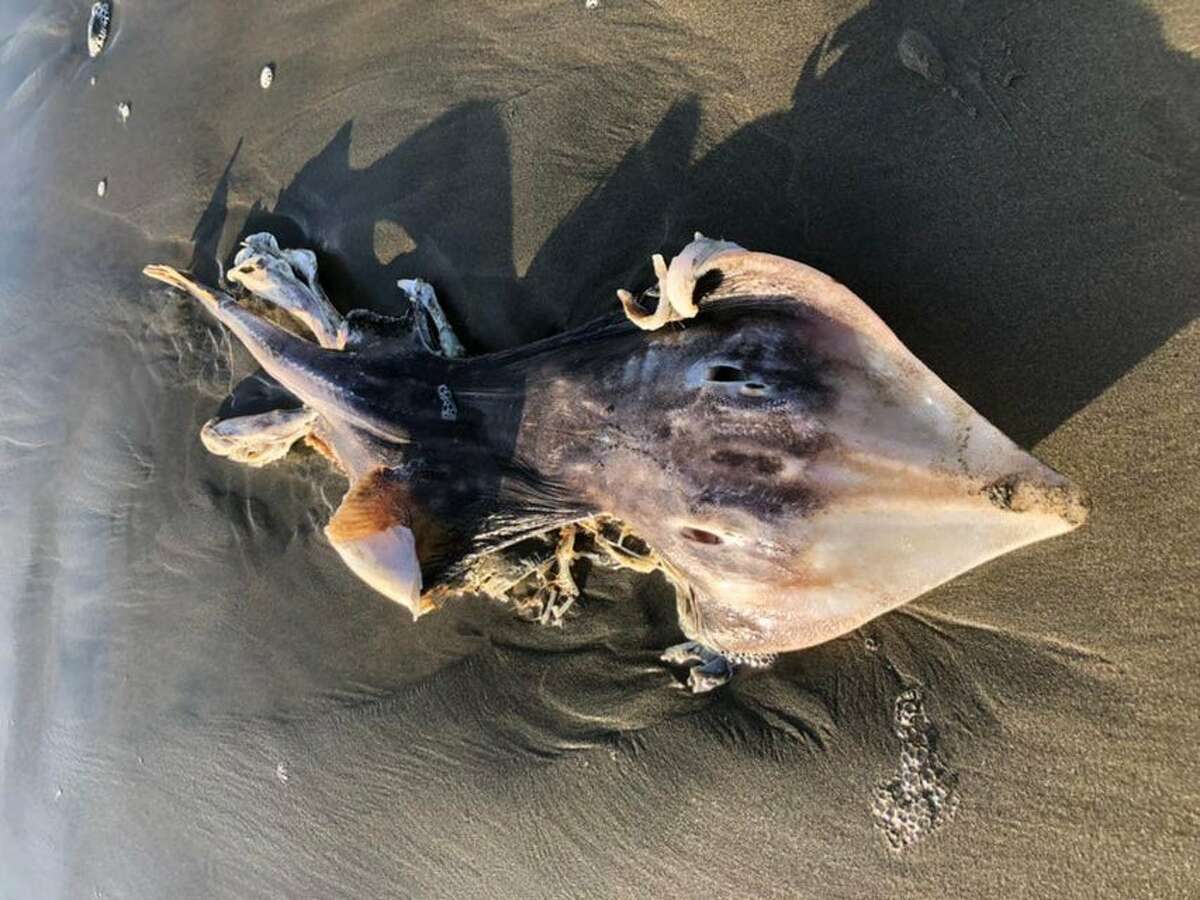 Nonetheless, the sighting proved intriguing, especially given that in the last month there were two separate instances of rare Pacific footballfish seen washed up on the shores of southern California. The deep-sea creatures are commonly found all over the Pacific Ocean, and the discovery was described to SFGATE as an “unusual” anomaly by ​​Dave Catania, the senior collection manager of ichthyology at the California Academy of Sciences, while Ted Pietsch, a University of Washington biologist who specializes in anglerfish, chalked up the sightings to coincidence.

The cause of the shovelnose guitarfish’s death remains undetermined, though its missing right pectoral fin suggests the possibility that it was attacked by a predator, such as a shark or a sea lion.